“An affirmation is a statement of Truth consciously used so as to become the directing power of Life’s expression.”
— Orison Swett Marden 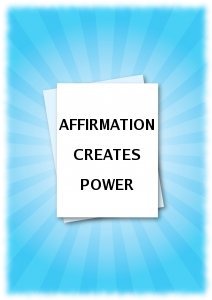 Only he can who thinks he can!

The world makes way only for the determined man,

for the man who laughs at barriers which limit others,

at stumbling-blocks over which others fall.

The man who, as Emerson says,

“hitches his wagon to a star,”

is more likely to arrive at his goal than

the one who trails in the slimy path of the snail.

Confidence is the father of achievement.

Some people are incapable of strong, deep conviction; they are all surface, and liable to be changed by the opinions of everybody else. If they resolve upon a certain course, their resolution is so superficial that the first obstacle they strike deflects them. They are always at the mercy of the opposition, or of people who do not agree with them. Such people are shifty and unreliable; they lack strength of decision, positiveness of resolution.

What is a man good for if he hasn’t strength of resolution?

If his convictions are on the surface, he stands for nothing; nobody has confidence in him.  He may be a good man, personally, but he does not inspire confidence. No one would think of calling upon him when anything of importance was at stake.

Unless conviction takes hold of one’s very being, there will be very little achievement in life. It is the man whose conviction is rooted deep and takes hold of his very life-blood, the man who is strong and persistent in his determination that can be depended upon. He is the man of influence, who carries weight; he is above the influence of any man who happens to have a different opinion.

If young people only knew the power of affirmation, of the habit of holding in the mind persistently and affirming that they are what they wish to be, that they can do what they have attempted, it would revolutionize their whole lives, it would exempt them from most of their ills and troubles, and carry them to heights of which they scarcely dream.

We are always talking about the power of the will. Its exercise is only another form of the affirmation. The will, the determination to do a thing, is the same as the affirmation of the ability to do it. No one ever accomplishes anything in this world until he affirms in one way or another that he can do what he undertakes.

It is almost impossible to keep a man back who:

The constant affirmation of ability to succeed, and of our determination to do so:

It reinforces and buttresses the natural faculties and power, and holds them to their tasks.

Constant affirmation increases courage, and courage is the backbone of confidence.

Furthermore, when a person gets in a tight place and says “I must,” “I will,” he not only reinforces his courage and strengthens his confidence, but also weakens the opposite qualities. Whatever strengthens a positive will weaken the corresponding negative.